Fungi of the Olentangy

To start, this article will mostly be about fungi that grow along the Olentangy rather than the fungi that grow in it. There are fungi that play important roles in decomposing submerged leaf litter and wood, and some that are major parasites of aquatic animals, but these are mostly microscopic and unlikely to be encountered unless you really set out to find them.

So, what are fungi? If you have come across old enough biology textbooks, you will have learned that fungi are a sort of plant. They are vaguely plant-like, but fungi are now considered to belong in their own kingdom more closely related to animals than any other major group of organisms. Like us, fungi “eat”, but they “eat” by dumping enzymes into or around the things they grow on rather than doing this in a specialized digestive tract within their bodies.

Fungi play three main roles in our environment, and those are decomposer, mutualist and parasite. Some fungi combine these roles, or play some other stranger role, but for the most part, the fungi mentioned here will fit into one of these three major ecological categories.

Most of the fungi that grow along the Olentangy are decomposers of wood, leaves, and other plant materials. Fungi are the most effective wood decomposers in our forests, and without them, our forest floors would have much thicker layers of fallen twigs and branches. Many of the major wood decomposing fungi produce mushrooms, and these mushrooms are then fed upon by animals, cycling nutrients from dead plants back into our ecosystems. Squirrels, deer, box turtles and many sorts of insects and other invertebrates use fungi as a major food source. Humans too. Some of you may know one or two of the Ohioan variety who feed on morels (Morchella species) in the Spring.

What exactly is a mushroom then? In the broad sense of the term, a mushroom is a spore-producing structure of a fungus that can be seen with the naked eye and the organism that produces it. Fungi are made up of microscopic, thread-like cells called mycelium, and most of this mycelium forms networks within whatever the fungi are growing on and are usually difficult to observe without a microscope. When you see a mushroom growing on a log, the portion you are observing is part of a much larger organism spread out within this log.

When the Olentangy floods its banks and leaves behind piles of woody debris, the sticks within these piles contain the mycelium of hundreds if not thousands of species of fungi, some of which will form mushrooms when the environmental conditions are right. This fungal “rafting” is one of the major ways that fungi can spread along the Olentangy along with spreading by spores. 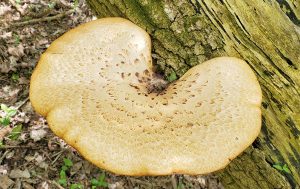 One especially common wood-decomposing mushroom species in our area is Cerioporus squamosus, commonly known as the “dryad’s saddle” or “pheasant back”. These produce large shelf-like mushrooms on large fallen logs, dead stumps, and on the dead portions of living trees. The tops, or “caps”, of these mushrooms are brown and have darker brown scales on them that make a pattern somewhat like that of the feathers on a pheasant’s back, hence the common name. The underside of the cap contains many off-white pores where the spores are produced.

Cerioporus squamosus is edible and it often begins before morels do in the Spring. It is not as flavorful as morels, but still perfectly edible when young and tender. It has been eaten by many disappointed morel hunters.

Many of the more sought-after edible mushrooms in Ohio are species that form mutualistic relationships with tree roots. These species produce meshes of plant root tips and fungal mycelium known as “mycorrhizae” where the trees provide carbohydrates to the fungal partner and the fungi provide water and vital minerals to the tree partner. Many sorts of tree in Ohio form mycorrhizae with mushroom-forming fungi, including oaks, hickories, beech, basswood, pines, and spruce. In the floodplains of the Olentangy, the most important mycorrhizal tree species is the cottonwood, although its mushroom partners are mostly either very small or potentially poisonous. There is a greater diversity of mushrooms that form mycorrhizal relationships as you head further from the Olentangy and uphill. The oak-hickory ridge tops along the Olentangy are a great place to see a wide diversity of mushrooms in the Summer and Fall.

One of the more common and charismatic mycorrhizal that grows in our forests from mid-Summer to the early Fall is Cantharellus lateritius, the “smooth chanterelle”. It forms mycorrhizal relationships with hardwood trees and produces bright orange trumpet-shaped mushrooms with caps that have a central depression and an underside that is either smooth or has blunt ridges. It often fruits in large quantities and stands out well against the brown and green of the forest floor. It has a faint fruity odor and has a meaty texture. I have also seen it being eaten by box turtles several times in Central Ohio. 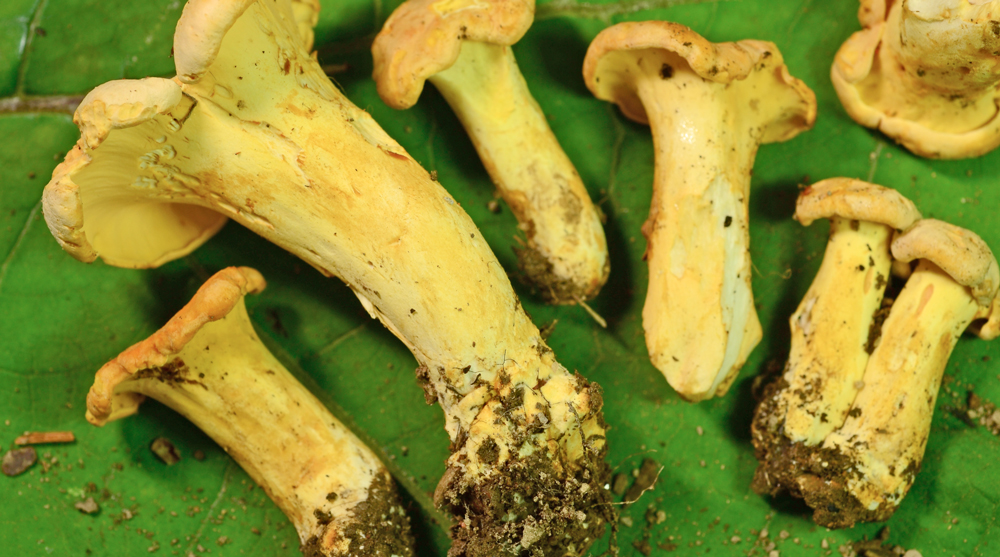 The third major ecological category of fungi, the parasites, are very diverse, although mostly microscopic. There are parasitic fungi that parasitize almost every sort of life form there is. The are fungi that are parasites on plants, animals, and even other fungi. There are even fungi that are parasites on other parasitic fungi, and these are known as hyperparasites. Some of the stranger parasitic fungi are those that parasitize insects, also known as entomopathogens. These invade the tissues of the host insect and kill them before bursting through their exoskeleton to produce a fruiting structure. There are some that are able to take control of the host insect’s brain and make it climb to a more suitable place for the fungus to produce spores before killing it. 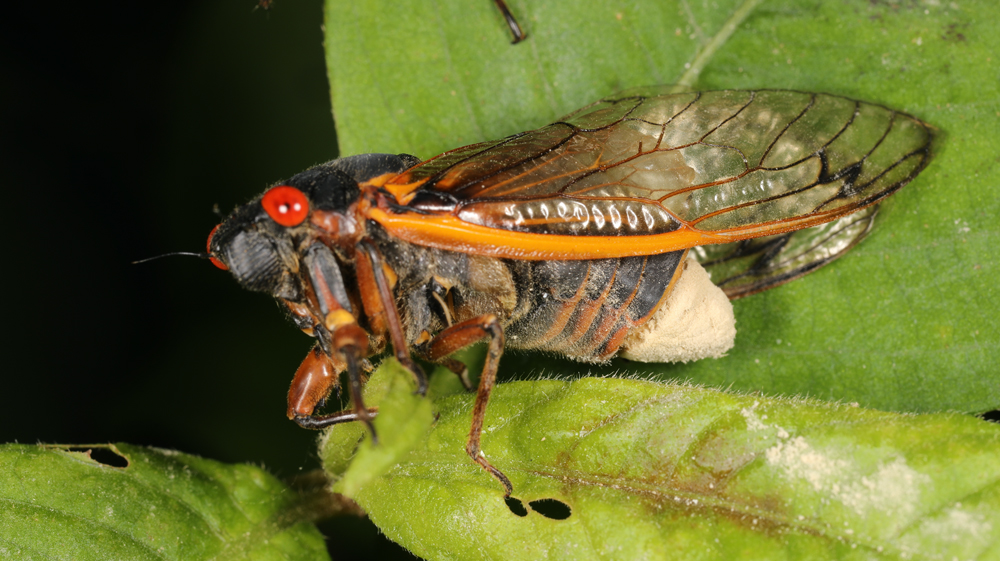 Massospora cicadina, the “flying saltshaker of death”, a bizarre parasite of cicadas that replaces the host’s abdomen. Photo by John Plischke III.

One especially bizarre example is Massospora cicadina, the “flying saltshaker of death”, which parasitizes cicadas and eventually replaces the host’s abdomen with its own spore producing surface before killing it. The cicada continues to fly around with its abdomen missing “shaking” spores into the air as it goes and will even attempt to mate with other cicadas in this state, further spreading the fungal infection to other cicadas. The fungus produces cathinone, an amphetamine that is also present in the qat tree used as a stimulant in the Arabian Peninsula and the Horn of Africa. The cathinone apparently makes the cicada unaware of its missing body parts and allows it to continue to fly around before the fungus completely burns it out and kills it.

There are many bizarre and widely varied species of fungi that grow in our area, and my current best estimate is that there are at least 5,100 species of fungi in Ohio. Because of this, if you look closely at the fungal diversity around you as you walk through our woods, you will very often come across something you have never seen before, maybe even something nobody else has ever noticed before. For those wanting to learn more about mushrooms in Ohio, the Ohio Mushroom Society puts on several yearly mushroom events, or “forays”, where you can have the mushrooms you find identified by mushroom experts and just have a lot of fun in the woods. For more information about the Ohio Mushroom Society, refer to their website at https://ohiomushroomsociety.wordpress.com/.