Neonics: What They Are and Why You Should Avoid Them

Neonicotiniods, also referred to as neonics, were developed in the 1980s and soon became the most used insecticide in the world. Their popularity spread in part because manufacturers advertised them as “safer” insecticides. By some definitions, this is true. Neonics have a relatively low toxicity to mammals and humans. They can also be applied in a targeted manner, decreasing the amount of run-off product. Yet only a few decades later, neonics have been largely banned in the European Union and have come under scrutiny in the United States. So, what is the problem?

Study after study have linked declining bee and bird populations to the use of neonics. Manufacturers claim that in the real world, wildlife only encounters quantities that are sublethal. The problem is that a sublethal amount of the toxin is enough to cause enormous damage to both an individual and, in the case of pollinators, its colony.

Neonics have several modes of application. These are: seed coating, drenching the soil around the base of a plant, trunk injection, dissolved in irrigation water, or sprayed on leaves. Neonics are a synthetic modification of nicotine, and they work in a similar manner. They are systemic insecticides, which means that regardless of the mode of application, the toxin binds to cells and becomes incorporated and distributed throughout the whole plant. If a bee encounters the pollen of a plant that grew from a treated seed – that bee becomes exposed to the toxin. Is such exposure enough to be dangerous to the bee? Unfortunately, studies show that it is. 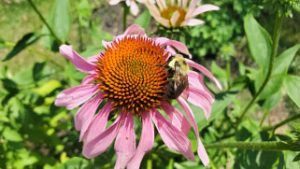 A pollinator enjoying an Echinacea flower. Photo by Sonya Afanasyeva.

In the mid-2000s scientists noticed a decline in the number of beehives and started to inspect the effects of neonics on bees. Throughout the 2010s, studies determined with growing certainty that neonics were in fact contributing to the decline of bee populations. According to a 2019 study, neonics have made the American agricultural landscape 48 times more toxic to honeybees than it was 25 years before. The Bombus Affinis, a North American bumblebee, has decreased in 90% of its natural habitats. Much of this decrease has been attributed to neonics. Studies have also discovered that the toxin can be found in soil and pollen up to two years after treated seeds were planted.

Worker bees have complex routines. They learn to understand smells and patterns and memorize the best routes to and from food sources. Neonics affect bees’ nervous systems. They hinder their ability to fly, learn, and memorize. While an encounter with a sublethal dose of neonics will not kill a bee, it affects its health and ability to work. An exposed bee is likely to spread the toxin and bring it back to its hive. As more bees are affected, the threat of colony collapse increases. Neonics can also harm the queens’ ability to reproduce, leading to a decline in worker bee production. Affected larvae take longer to develop and exposed adults have shorter life spans. The toxin can also disrupt bees’ immune systems, making them vulnerable to viral infections. 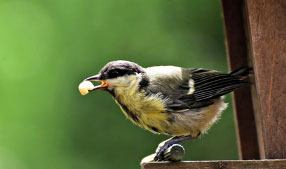 An American songbird. Photo from inhabitat.com

Declines in bird populations have also been linked to neonics. Insect eating birds have been harmed both by a decline in their food source and by consuming affected insects. More notable is the dramatic decline in North American songbirds. Much like nicotine, neonics act as an appetite suppressant to seed eating birds. Birds migrate during spring when farmers are planting crops. During migration, gaining weight at stopover sites is crucial for birds. If a bird consumes part of a treated seed, it stops eating and loses weight. One study tracked birds that consumed a tenth of a treated seed. The birds were lethargic and did not have an appetite. They lost 6% of their body mass within six hours, and many stayed behind to recover for an extra three days. Even if a bird recovers, the delay can still damage its chances of surviving and reproducing.

There is good news, though. The Environmental Protection Agency is very concerned with the continued use of neonics in the United States. The agency is working on legislation that would ban or restrict their use. Early in 2019, over 140 garden retailers, including Home Depot, Lowe’s, Walmart, Kroger, and Whole Foods, committed to cut products that contain neonics. Most stores have not yet announced whether they have accomplished this. Home Depot claims to be 98% free of such products. They also label the plants that contain neonics, making it easier for shoppers to avoid them.

You can also help to decrease the spread of neonics. When shopping for plants, ask your nursery staff if they know which products have been treated with neonics. Avoid insecticides with these ingredients: imidacloprid, acetamiprid, dinotefuran, clothianidin, and thiamethoxam, thiacloprid, nitenpyram. Finally, plant flowers that are safe and attractive to pollinators in your yard. Even small urban gardens are valuable to pollinators, who are in turn vital to the health of our ecosystems.